I thought I’d use this blog to talk about the different arachnids we have at Las Tangaras and the area around Mindo.  I hope I will also impart a bit of the wonder and natural curiosity I feel when I see them.  Arachnids seem to have somehow burrowed into the human subconscious during our evolution, often startling us with pains of fright.  Still, spiders, let alone arachnids have been around for about 140 million years before our ancestors’ evolutionary scurry from scaly reptile to furry mammal.  So arachnids have stood the test of time almost as well as plants and are nearly as omnipresent as insects.  To me, this alone should justify looking closer at our eight legged friends, not as enemies but fellow citizens of the planet.

Even less people know about the other stranger orders of arachnids:

There are the strange pseudoscorpions, tiny creatures resembling scorpions but without the stinger.  Some pseudoscorpions can be found riding under the outer wings of harlequin beetles in the neotropics.  Pseudoscorpions are incredibly small, and it’s lucky finding one at all.  I’ve spent days in caves, a habitat they often frequent on my knees, peeping into cracks, turning over rocks without ever seeing a single one.

There are a few other orders in the class arachnidae but I really only want to talk about a few more that I have seen since arriving at Las Tangaras.  Namely, Amblypygi and Opiliones .  The scorpion-spiders (neither spider or scorpion, confusing common name) and the Harvestmen.

Most people have seen harvestmen and if you’re like me, you even have warm, fuzzy childhood memories of watching them trundle along and even across your open hand, knowing their harmless.  Most people have seen these arachnids quite often in fact, without realizing their not spiders.  You’ve most likely heard of them referred to by their common name, “daddy long-legs” and learned perhaps among other bits of mis-information and urban legends that they’re the most venomous spiders in the world but that their mouths are too small too bite a human.  Not only is this not true but most daddy long-legs aren’t even spiders. I say most because there are some look-alikes that are actually spiders.  Confused?  Let me explain.  Harvest men or Opilionids often have long, spindly legs, which is where the common name, “daddy long-legs” comes from as every child can tell you.  However, this is not the diagnostic feature to separate them spiders (as few people outside of arachnology labs and spider clubs can tell you).  The true way to tell a harvestmen from a long, spindly-legged spider is to look closely at the body segments the spider has two clear body segments but the Opilionid has only one.  Harvestmen also don’t make webs like spiders and roam about the forest usually at night, using their extremely long appendages like antennae to find and quickly subdue any unwary prey.  We’ve seen several Opillionids since arriving at Las Tangaras, always at night, ranging from the tiny and plain to the large and ornate.  A few days ago I was even lucky to get a photo of one eating a caterpillar as I accompanied a Chilean tourist on a night hike. 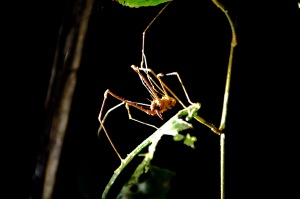 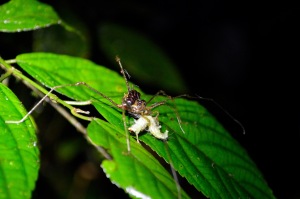 There’s also the Amblypygians, the “Scorpion-spiders” an entirely tropical order.  I’ve heard stories of caves in Mexico filled with millions of these climbing on the walls, ceilings, floor, everywhere.  Although that’s probably a little bit of an exaggeration, they are mainly nocturnal, living in forest or hiding in caves.  They also seem to have the rudiments of social structures and I know of a research project in Puerto Rico looking at the evolution of social behavior in them.  For most people one of these creatures, much less an entire cave full of Scorpion-spiders is a terrifying thought.  It’s useful then to remember, much like the Opilionids, Amblypygians are completely harmless to people (in less you have a weak heart).  To the untrained eye, Scorpion-spiders look like giant spiders straight from the scariest parts of The Hobbit, now in flesh.  They’re not spiders though and unless the Shire is more tropical than I always imagined, they couldn’t set mandible there.  They have long appendages, as with the harvestmen an adaptation for living in dark caves or hunting forest floors at night.  Unlike the harvestmen or spiders with their round, plump abdomens, they have flattened “pancake-like” bodies.  Also Amblypygians appear to have ten legs (Maybe encouraging you too love this one will be harder than I thought), in reality scorpion-spiders like all arachnids have only eight legs.  What appear to be a fifth set of “legs” are actually modified mouth parts, made to shoot out, grab and subdue prey for eating.  Like the Opilionids, Amblypygians don’t use webs to capture their prey and instead roam about, using legs like antennae and attacking prey items with their raptorial appendages (those large modified mouth parts). 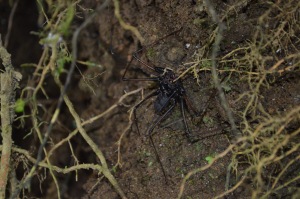 There are other arachnids I could talk about, such as the camel spiders who had their hey-dey as deceptive pictures and overblown stories spread from soldiers in Iraq across the internet.  Or vinagaroons that look similar to scorpions but shoot vinegar out of their posterior as a defense.  I haven’t seen any of these since I’ve been at Las Tangaras though.  I have seen spiders almost every night though, large furry, completely harmless wolf-spiders (possibly tarantulas but I’m pretty sure their wolf spiders).  We see these come out at night to hunt as well.  It seems a little creepy to many people to be completely surrounded by arachnids all the time but in reality unless you’re living in Antarctica, we all live with these creatures.  If you’re adventurous and want to see different arachnids, come to Las Tangaras and see what bizarre treasures are living in the tropical night.  Otherwise, if you’re lucky enough to live near an empty field full of plants (in could be “weeds” or crops or wild flowers, it doesn’t matter) wait until there’s an early morning and everything is covered in sparkling dew.  Walk through the field and see the hundreds of spider webs glowing in the morning light like strings of jewels and think.  Imagine how different our wonderful planet would be if their weren’t spiders secretly spinning millions of webs, or scorpions, or opilionids or any of the rest of them.  Like it or not, they are part of the land like all creatures and so in a very real way, a part of us as well. 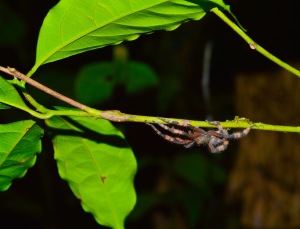 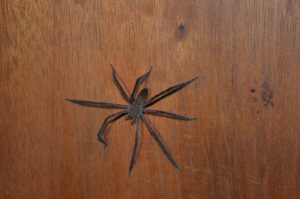